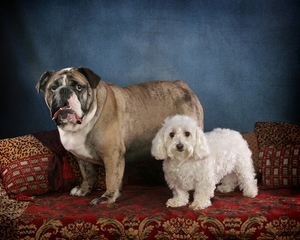 "Evan" (now Harley) is a Maltese/Bichon mix adopted from K94U on March 15, 2008.  When we adopted him he was afraid and grossly underweight.  His name is now Harley and he has been "my angel" for almost three years now.  For his birthday in March we took him and a few of his neighborhood "doggie friends" to the local yogurt store for some vanilla soft-serve to celebrate.

This is Harley now and his bulldog brother, Max.  We bought the pet door for Max so that he can wander in and out of the house as he please, but Harley loves jumping through it.  You should see the two of them.

We LOVE our Hale Pet Door. We bought it so that "our boys" could have unlimited access from our house into our garage. They both love going through the door. It took us less than a day to convince them to use it. My husband built a small, carpeted step down so that Harley would have a softer landing into the garage. Thank You very much for the donation you made to K94U Rescue. They are such an important part of our family. I applaud your generosity!!!