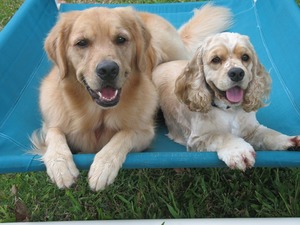 We adopted our golden retriever, Shelley, after she was returned to the breeder on Maui at the tender age of only 4 months. Our cocker spaniel, Jackson, came from the Big Island of Hawaii four months later. He was so small in comparison that we thought Shelley would trample him in her excitement. Now that they are 3 years old, they are best friends. They both compete in agility trials with Joe (their human daddy), but Shelley would rather go swimming, and Jackson’s favorite pastime in hunting lizards. Their Hale pet door lets them enjoy indoor-outdoor island living in Kailua, Hawaii.