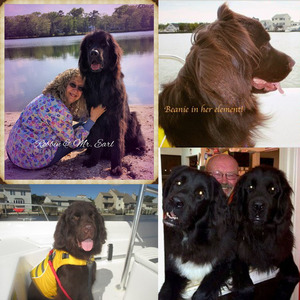 Our four monsters absolutely love the freedom your door has given them!

First, our Mr. Earl Scruggs…so named after the banjo legend because his hind toes are white like he’s wearing banjo picks! (The wife and I play Bluegrass…she’s the banjo picker and I play the upright doghouse bass). To put matters into perspective, Robbin is 5'9" so she's no tiny girl. That picture was taken when Earl was ten months old. He's four years old now, weighs 206 pounds and is actually a slight bit on the lean side because of his size. I stand an even six feet tall and Earl puts his paws on my shoulders and taps his chin on top of my head!

And here’s the other culprits, siblings Princess Grace Jelly and her brother, Mr. Earl standing at the dutch door. I’m six foot and standing behind them!  Then there’s Mr. Dooley who is named after the Dillard’s Bluegrass song and finally, Miss Beanie Cocoa Bean.

All four of my Newfoundlands took to it (their new Hale Pet Door) instantly and no training was necessary. I’ve got one lazy guy that will lay inside with his head hanging out the flaps.

Your door has been a Godsend for us and especially the pups…except when a soaking wet Newfie crawls up on my pillow after he’s been laying in a downpour outside for twenty minutes during the night. It is well used 24/7 as I never have had to use the security panel. The door is protected by an aluminum awning over the door so it hasn’t been subjected to harsh weather. Truly is a phenomenal product. It’s nice to hear the magnets clicking and then check my Nest outdoor cam to see which monster has gone out. I no longer feel like a doorman! It does our heart good to see the difference in the pups now that they have that freedom!!!!