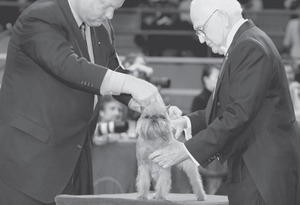 A judge examines a Brussels Griffon in Westminster's Toy Group.

(NAPSA)—Every year since 1877, the Westminster Kennel Club has staged its famous All Breed Dog Show,  making it America’s second- longest, continuously held sporting event. In those early years, of course, you had to attend in person at Madison Square Garden in New York City if you wanted to see the country’s greatest dogs.

But since 1948, millions of viewers have been able to see the evening finals of the competition on television, which happens once again in 2007, live on USA Network on February 12-13. And for the third year, viewers will be able to watch highlights of each day’s breed judging by logging on to the Westminster Web site (www.westminsterkennelclub.org).

Here are some facts that will help you understand and enjoy the live telecast or the streaming video.

Judging and Standards: The purpose of dog shows is to evaluate dogs as breeding stock for producing the next generations of healthy, happy dogs. Each breed’s parent club creates a Standard, a written description of the ideal specimen of that breed. Generally relating form to the original function that the dog was bred to  perform, most Standards describe general appearance, movement, temperament and specific physical traits such as height and weight, coat, colors, eye color and shape, ear shape and placement, feet, tail and more.

Best of Breed or Best of Variety: The dog selected or the award made by a judge to that dog chosen as the best representative of the Breed or Variety. Variety: A division of a breed based on coat, color or size. For example, Poodles (size: Standard, Miniature, Toy), Cocker Spaniels (color: Black, Parti-color, ASCOB); Collies (coat: Rough, Smooth).

Conformation: The structure and physical characteristics of a dog.

Stack: The pose of the dog in its natural stance.

Gait: The action of movement of the dog.

How the judging works: Competition at Westminster is held in three different levels. Judges select their winners based upon how close the dog comes to fitting the ideal as described in the Standard.

The first competition is in the Breed (currently, 165 breeds and varieties are recognized). One dog is selected as Best of Breed or Best of Variety and advances to the next level of competition, the Group.

The Group judges choose four placements, 1st through 4th in each of the groups, so that there are seven Group winners that advance into the final round of competition, Best in Show.

There, the judge selects one final winner for the ultimate

The Westminster Kennel Club is America’s oldest organization dedicated to the sport of purebred dogs. Established in 1877, Westminster’s influence has been felt for more than a century through its famous all breed, benched dog show held every year at New York’s Madison Square Garden. The show is America’s second-longest, continuously held sporting event. Westminster will stage its 131st consecutive show on February 12-13, 2007, nationally televised on USA Network. For more information, log on to www.westminsterkennelclub.org.