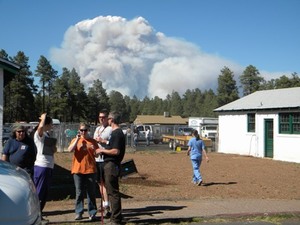 Second Chance Center evacuating in front of the Shultz Fire in Flagstaff, Arizona

DENVER, June 21 /PRNewswire-USNewswire/ -- As the wildfires near Flagstaff, Ariz., continue to grow, the Second Chance Center for Animals has been forced to evacuate with 180 animals and set up a temporary outdoor shelter beyond the fires' range at Fort Tuthill County Park in Flagstaff. In response, the American Humane Association gave Second Chance Center for Animals a $5,000 emergency grant for supplies that are needed at the temporary shelter. The temporary shelter is also taking in pets of people who are evacuating their homes and have not been able to make other arrangements for their pets.

The Coconino Humane Society in Flagstaff was first evacuated due to the fire last Friday, and Second Chance Center for Animals took their animals. Now that both shelters have been evacuated, the temporary shelter is caring for all of the shelter animals in the area. The shelter continues to need supplies and volunteers during this emergency sheltering effort, which is expected to last for days or weeks.

"Emergency situations like this require a lot of resources in a short amount of time, and we hope that our grant will help the shelter acquire the items they desperately need to care for the animals," said Debrah Schnackenberg, vice president of American Humane's Animal Protection Programs. "These types of events often bring communities together, and it is our hope that people will unite to help these animals."

American Humane is currently seeking additional funds to be able to provide grants to other sheltering organizations that need assistance. Grants are available based on resources and the generosity of the organization's donors. Learn more about how to donate online at www.americanhumane.org/donate.

Founded in 1877, the Denver-based American Humane Association is the only national organization dedicated to protecting both children and animals from abuse and neglect through public policy, education and services reaching a wide network of organizations and advocates. Programs include raising awareness about The Link® between violence to people and violence to animals, as well as the benefits derived from the human-animal bond. The organization is also known for "No Animals Were Harmed,"® the end-credit disclaimer seen on film and TV productions. American Humane® Certified is the nation's largest and most regarded independent standards and certification program for farm animal welfare. American Humane earned the Independent Charities of America's "Best in America" Seal of Approval and is an American Institute of Philanthropy "Top-Rated Charity." Learn more at americanhumane.org