When we sign up a new Rescue Rewards partner at Hale Pet Door, the first thing we do is go to their website and look at every little face listed on the “Available Dogs/Cats” section.  Our regular workload is interrupted for a bit, as several of us gather round the computer to “ooh” and “aah” at the cute babies waiting for homes.

When we signed up Enchantment Chihuahua Rescue of New Mexico we gathered round to look at the adoptable dogs.  But our reaction was a little different than usual because we were so taken aback by the stories of abuse and neglect. As the group’s website explains, Chihuahuas are the most overbred dog species in New Mexico.  Because the state is economically depressed, pets often face abuse, neglect, abandonment and cruelty.   The volunteers with Enchantment Chihuahua work hard to help the dogs in their care.

Joanne Donsbach of Enchantment Chihuahua Rescue tells us that the group has adopted out approximately 220 dogs since they formed in early 2010. In mid-February they had 52 dogs in foster care, so that brings the total of dogs helped to 272.

Here are a few of their stories. 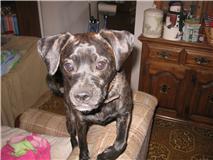 Alice was still a puppy when someone poured a something on her back that caused a severe chemical burn and great pain, and then she was dumped. The pound was going to euthanize her but had to hold her for 72 hours, so they did not attempt to treat her at all. We have her now and she has undergone and long recovery in a very loving foster home. She is healed and ready to be adopted. 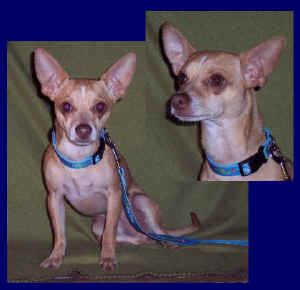 Applebee’s family moved out and left this little guy to fend for himself in the back yard. Neighbors were sympathetic and brought him food and water. After several weeks we were able to bring him into rescue. He is still very worried about what life might bring and is working hard at settling in with his foster family. 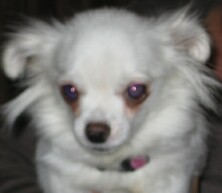 Bopeep came from Carlsbad and had probably been kept in a small cage & used for breeding. 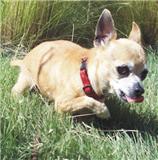 Carmen was found on a ditch bank covered in fleas and ticks. She is blind in her left eye due to a big cataract. She has no teeth and the vet said the reason for her floppy mouth is that the front third of her lower jaw is missing. She weighs less than five pounds.  Her walk looks a little awkward due to bad patellas.  Her estimated age is 14.

Coyote was found with his nose mostly cut off. Nobody knows what happened. Thanks to the expert work done by the veterinarian, it was successfully repaired. 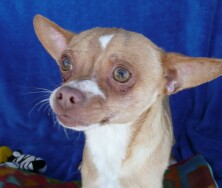 Geko was picked up wandering around Las Vegas, N.M.  This was after he had been attacked by some other dogs. He is having trouble trusting people, but still likes others dogs. 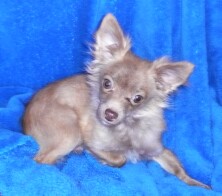 Kringle was found stuffed in a box outside the front door of Animal Humane in Roswell and weighed only 12 oz.  He was nursed back to health and now weighs 3 lbs. 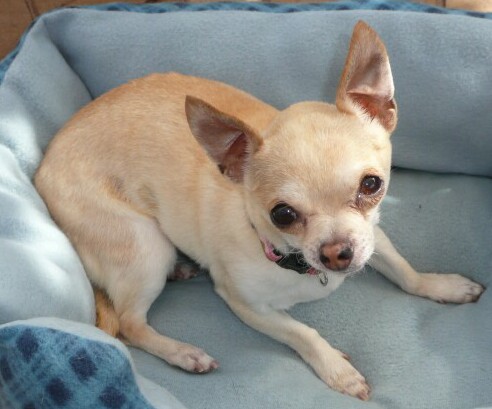 Last but not least: Tita - I am a Special Needs girl and my biggest need is LOVE. I was found near death on the Navajo Res. You see, I suffered a stroke. I am fine now except for some vision problems, a funny rear leg gait, and a cute tilt to my head. Weighing in at only five pounds, I love to be carried around or sit on your lap.

To see all the dogs available for adoption and for more information, go to http://www.enchantmentrescueltd.com/.