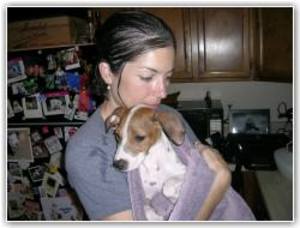 Mayday Pit Bull Rescue started with one little dog in a bad situation. Now known as “Mayday,” this little pit bull was scheduled to be euthanized at a local shelter because he had an eye condition which required surgery and virtually eliminated any chance of adoption.

As the group’s founder and president Jennifer Mazzocchi writes on her group’s website: “Walk through any shelter and you will notice that the breed that fills the majority of kennels is the pit bull and many are in situations similar to Mayday’s. They have been neglected and require medical care, they have been abused and are shy or unresponsive or bear the scars of their past treatment. They have been bred or made to fight for profit.”

For Mayday, rescue came in the form of a kind deed by an Animal Control officer who allowed Jennifer to adopt him, get him the surgery he so desperately needed and provide him with a loving home. On that day, April 14, 2008, Jennifer decided to dedicate herself to saving pit bulls in similar situations - those whose lives were hanging in the balance between ambivalence and compassion.

Mayday is now a happy and healthy member of Jennifer’s family; and the rescue group established in his name is devoted to creating that same future for other pit bulls in need.

Mayday Pit Bull Rescue & Advocacy is devoted to rescuing, rehabilitating and securing placement for pit bull and pit bull mixes into responsible, permanent and loving homes. Volunteers strive to educate the public about the pit bull breed in order to relieve suffering and prevent cruelty.

They advocate responsible pit bull ownership and educate the public about breed specific legislation. The group also helps dogs of other breeds with extreme medical or behavioral issues. More than 300 dogs have been saved since the rescue started.

Mayday Pit Bull Rescue is made up of a small group of volunteers based in Phoenix, Arizona, who are dedicated to improving the lives of pit bulls and re-establishing the breed as a beloved family pet. They work directly with local Animal Care and Control shelters to rescue pit bulls from euthanasia with the goal of rehabilitation and permanent placement.

For more information, go to www.maydaypitbullrescue.org.