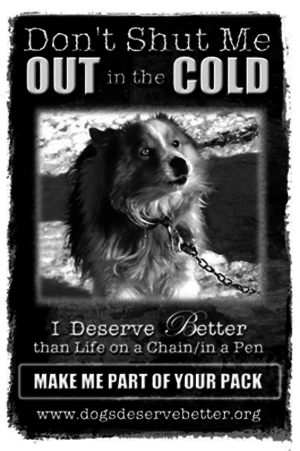 Dogs Deserve Better, a Hale Rescue Rewards partner, is dedicated to ending the cruelty of chaining and penning dogs for life.  This is a national group with more than 100 volunteers around the country who rescue dogs from chains and pens.  They rehabilitate 400 to 600 dogs per year.

DDB was the first national organization to come out against chaining and penning of dogs. The group has won numerous awards, including first place in the ASPCA/Chase Pet Protector Award and the 2010 First Place Winner of the American Dog Humanitarian Awards.  DDB is headquartered in Smithfield, Virginia, at the facility formerly owned by Michael Vick’s Bad Newz Kennels.  The facility is being transformed into the Good Newz Rehab Center for Chained and Penned Dogs.

DDP founder Tamira Thayne has spent nearly 800 hours over the past decade chained to a doghouse to fight for better laws and better treatment of man's best friend. This past July she took her doghouse and chain on the road for a Ten State Capitol Doghouse Tour as part of the “Dogs Deserve Better Chain Off 2012.”

Thayne logged 80 hours on the chain, doing eight hours on the capitol steps of 10 states, where she was joined by local dog advocates who agree that dogs deserve better than life on the chain. Her trip came on the heels of a massive heat wave that has struck the nation, one which had dogs dying of heatstroke in every state it hit.  The Ten Day Capitol Doghouse Tour, held July 2-13, traveled to Capitol buildings in Pennsylvania, New Jersey, Delaware, Maryland, Virginia, Connecticut, Rhode Island, Massachusetts, New Hampshire and New York.

Thayne states, "Most dogs we see chained or penned have water only once a day if they are lucky. This water is quickly consumed or spilled, leaving them with nothing else and no means of obtaining any as they are chained to a small, confined space. Many have no shade, and experiments conducted by our organization show that the heat index inside the doghouse is typically ten degrees HOTTER than outside. Which means they have no means of relief from the sweltering heat and can quickly die of heat stroke.

“This is extremely cruel, and we are urging EVERY dog caretaker who keeps their dogs outside to do what is morally right and bring them inside to the air conditioning.  There must be a way to make people understand how cruel this is, and there must be more laws passed to protect these dogs."

Thayne continues, “These dogs are NOT FREE—they spend their entire lives at the end of a chain or enclosed 24/7 in a small, lonely pen. Dogs want nothing more than to be with us, their pack, and leaving them in solitary confinement is inhumane and neglectful.”

Go to http://www.dogsdeservebetter.org/ for more information on how to help.